All acne is not the same. There are many types and degrees of acne breakouts. This is a very important principle to understand, as it will determine what type of treatments for acne will be most helpful.

A comedo is an acne-prone pore. It is sticky and clogged with dead skin cells, oil and debris. If the center is open, it often appears black and is called a “blackhead.” If the pore is closed, it often appears white or skin colored and is referred to as a “whitehead.” 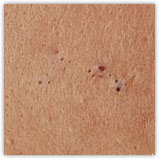 A papule is a small, dome shaped, usually red, solid bump commonly referred to as a pimple. It is formed by a localized reaction in the skin in response to a clogged pore that contains bacteria. Sometimes, papules are very small, making the skin feel rough and irritated.

Pustules are similar to papules, except that the inflammation is more intense, leading to the formation of pus that accumulates at the center of the lesion. The pus consists of byproducts of inflammation, including white blood cells, bacteria, dead skin cells and other debris. 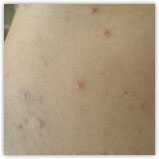 When a papule or a pustule heals, spots of discoloration are often left behind. Usually these are reddish in color. These flat spots are referred to as macules and can remain noticeable for weeks or months before they fade away. Sometimes macules are dark in color, especially in people with more deeply pigmented skin. 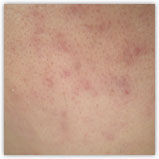 A nodule has the same features as a papule, however it is much larger and results from deeper and more intense inflammation. This may cause destruction of normal skin and leave a scar upon healing. Because of genetic differences, some people are more likely to develop scars than others. 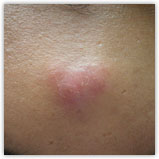 An acne cyst is not a true cyst but is similar to a pustule, however it is much larger and results from more intense inflammation causing the accumulation of pus and byproducts of inflammation. Often, cysts may drain their contents and can often heal with significant scarring. 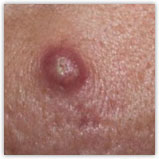 One of the most dreaded aspects of acne is the risk of developing scars. Acne scars can take many shapes and forms. Some look like deep ice pick holes, some appear less deep but can look like large indentations in the skin while others look like scars left over from the Chicken Pox. Sometimes, acne scars grow very large and form keloids, which are scars that can become very thick and disfiguring. Keloid acne scars are more common on the chest, back and shoulders. 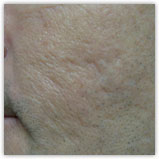 Why we Only Treat Acne